Happy holi to everyone.......... it's one festival that I really love, not that I don't like others. But this I guess is my type of festival. A day in Indian society when there are no inhibitions; a day out of the boring 356 days when we see grown-ups in the family dancing like freaks and hiding like kids after doing a mischivious act. People forget all boundaries, I see uncles teasing aunties, young ones enjoying with the elderlies, even strangers showing warm feelings for each other. Shouldn't this happen more often? 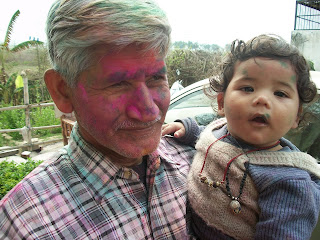 And on the eve 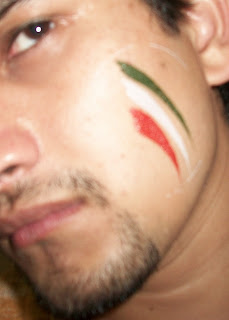 of Holi we witnesed a great day in the history of Indian sports, we saw Indian hockey team thrashing Pakistan by 4-1. An amazing treat, I feel blessed to have seen the match at Maj Dhyan Chand Stadium. What a game, what an approach, what a finish. The only thing that I missed was a good fight from our skillful neighbours. It was hard to beleive that the team that has the best penalty corner specialist (Sohail), a great forward (Rehan) and vetran Shakeel; did not show anything to the Indian crowd who appreciated them for being numb :) 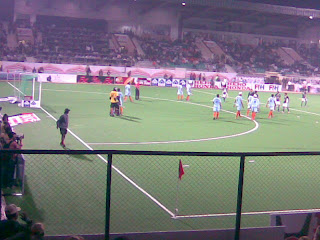 An image after Sandeep Singh's goal (sorry for the poor clarity, cameras were not allowed due to security )

I went to the stadium well in advance to ensure that I dont miss any action. Reached when Aus-Eng match was going on and I was pleased to see the sensible English side taking good care of the agressive bunch from Australia. In the first half I also had an opportunity to see an Indian sporting legend (if you don't think he is one, then he is one in the making), Lt Col Rathore. What charm this man has, how simply he behaves - I loved his enthusiasm for the game and his special request to people to watch the game and not him.

During second half of the game both Eng & Aus teams were astinished by a huge roar from the crowd. All 24 people on the field including 2 refferees were not able to get what's happening in the stands. It took them a while to know that 25-30 the supporters from other side of the border had arived. They were carrying Pakistani flags and messages for their team. The moment one of them shouted 'Pakistan Jeetega'; hundreds of us sorrounding them roared "Jeetega Bhai Jeetega, Hindustan Jeetega". There was a huge sound of 'Bharat Mata ki................Jai'. Now my answer to all those who say no one watches hockey these days, if you were there on 28th Feb, you wouldn't have this complaint again. People from all ages, sexes, colours and class poured in, all type of voices hard, soft, rough, heavey, light were at the hilt of their volume levels to cheer for India.

In the midst of all this, I was cought by a thought - that actually there is no difference, between those 25-30 people & us. They speak our language, we look like them, we have similar skin colour, height.......... Really it's just some intangible things that seperate us. I was also impressed by one of the messages of a Pakistani supporter which said 'Happy Holi to India, from Pakistan'.

Coming back to the game..............what a response, what an acknoledgement, what a reply our hockey team gave. Be it the skills of Halappa or be it the scoop of Vikram, be it the movement of captain Rajpal, the goal of Shivender, or be it the defense of Sreejesh. The result was amazingly amazing, especially when I was not expecting anything out of this game. Who would say that this team was written off before the tournament started.

They have given us a good reason to support Hockey again; I will now sign off with.......

Posted by Mahaveer Singh Bisht at 10:16 AM